This week’s photo competition saw another landslide win, with one photo taking a whopping 44% of the votes. No other photo came close to giving the top pic a run for its money with the next closest photo securing just 17% votes.

The hot shot, taken by ITU’s own Janos Schmidt, was captured before the races began in gorgeous Casa de Campo. While the ladies enjoyed Madrid’s famous sunshine on event day, the Spanish capital city endured a chilly spring, meaning wetsuits were almost required despite the fact that summer’s heat was quickly approaching.

Here, Aileen Reid chose to stay warm while loosening up with a wetsuit prior to racing. Although the start pontoon was a solid meter to the water’s edge, Aileen managed to balance herself on the starting edge with no help from her hands. The Grand Final silver medallist almost appears alien-esque in her super athletic ability to jump from the water without the help of her upper body.

Coming in second this week was the photo of Vicente Hernandez in flight after his first turn around the lake in the men’s race. 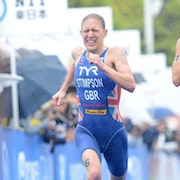 In the last two weeks, we've seen a couple of close races between the top photos of the year, but this week was no contest.… 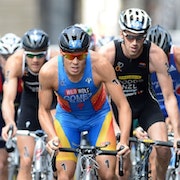