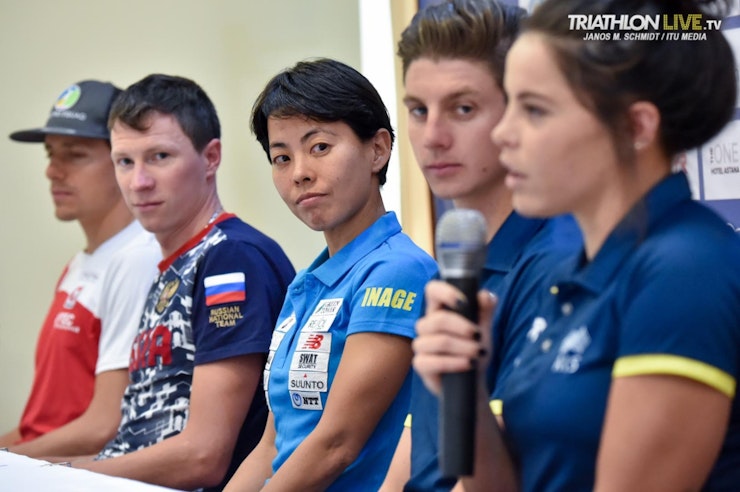 The Kazakhstan capital Nur-Sultan – formerly Astana – will host the eighth stop on the 2019 World Cup circuit this weekend, with the women underway at 9am and the men at 11.30am on Saturday 15 June. A global selection of prime podium potential gathered on a sunny Thursday afternoon for the official press conference, but with the weather set to take a turn for the worse, here’s what they had to say…

Tamsyn Moana-Velale (AUS)
“I was here for a two-week period before the race last year and got to know the place a bit and I’ve been able to keep up with some of the kids that we worked with last year. It’s going to be chilly but I don’t mind the cold, I’m quite happy when it is like this, but I know it’s going to be a tough race.”

Lukas Hollaus (AUT)
“This all brings back memories from last year, but I know the city better this time, I know where to go for a run or ride, and my preparations have been good. The course is relatively straightforward but we will see how it all develops on the day of the race. In Cagliari I was working hard but just off the bike pack and knew I could go really deep on the run… the whole season is going well so far and I want to be just as fast here as I was in Cagliari.”

Ai Ueda (JPN)
“I’ve been on a road to recovery since my crash in the Abu Dhabi Mixed Relay where I had some bad injuries, but I’ve been getting better and improving with each race so I would love to get a podium here and come to the end of what has been a difficult few months.”

Brandon Copeland (AUS)
“A lot goes into having a good race, there are always a million things that can go wrong and that also need to go right if you’re going to win at this level. If I can get a good swim in and be in amongst the pack then I’ll be in good shape to challenge for my first World Cup gold.”