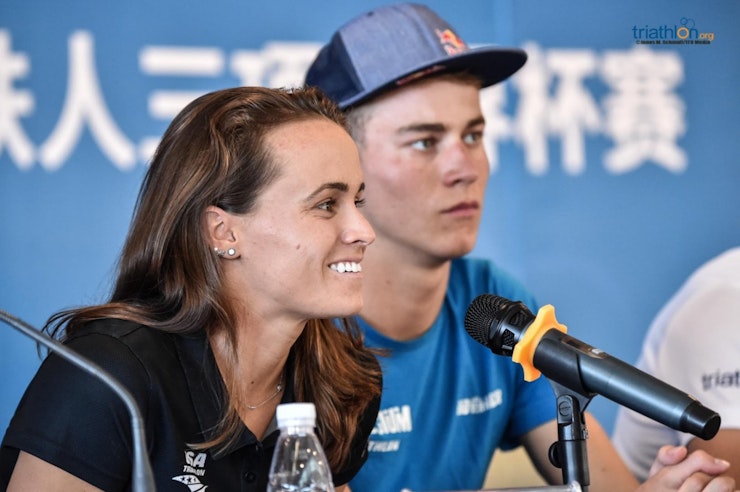 The Weihai World Cup returns for its second year this weekend, the beautiful coastal course featuring one of the toughest bike sections out there. A top-class field is ready to tackle the long climb and fast descent, and with the bike and swim familiarisations completed on Friday morning, here is what some of the athletes had to say about the race.

Marten Van Riel (BEL)
“The course is amazing and really plays to my strengths. I look forward to attacking the hill but the downhill will be really exciting, it’s a technical 60-70kph. Ideally want to attack the bike and bring some strong guys with me like Alessandro Fabian and Russell White who were great on a tough course in Karlovy Vary, but the likes of Rodrigo Gonzalez and Gustav Iden will always be there challenging too. My season has gone really well and been a good step up since last year, so this year’s consistency in the World Series has helped me forget some of the bad luck I had earlier in the year.”

Taylor Spivey (USA)
“This is my first time in China so I didn’t know what to expect but Weihai is beautiful and I always love a race by the ocean. It’s one of the most difficult bike courses i’ve done this year with the switchback followed by a technical descent, so it’ll take a strong cyclist to thrive in this race. The girls I train with, Yuko Takahashi and Claire Michel, are great cyclists so I know they’re really going to test me.”

Gustav Iden (NOR)
“It’s my first time racing in China and it’s very different to what I’m used to in Europe, but everything’s under control and I’m ready for this. The bike course suits me perfectly I think. it’s going to be a very hard triathlon but I’ve been training hard – I’m not the kind of guy who saves himself for the run so it’s going to be very good for me. It’s been a rollercoaster season, with great highs and some real lows – I’ve only finished 4 out of 11 this year with illness, crashes and flats which is disappointing, so I’ve changed my tyres! Now I need to finish the year on a high note.”

Kaidi Kavioja (EST)
“I got my first WC podium in Karlovy Vary and that was exciting, but the year as a whole has been very positive. I felt I underperformed last year but a new training group and new coach has been really good for me. There’ll be six girls from the Tri squad I train with and they are all strong, so if I’m near them I’ll know I’m in a good position. The support from the Asics World Triathlon team has been amazing for me, the support of a coach and team around really helps give you that extra belief.”

Rodrigo Gonzalez (MEX)
“I got a flat in Gold Coast and couldn’t finish so I’m really hoping for a good race in Weihai. Winning in Huatulco was great earlier this season but I see that as just another good result of many, I hope. China has been lucky for me. I won in Chengdu in 2016 and came second in Weihai last year, was third in Chengdu this year – I don’t know why but I’ve had some great performances here. The course is hilly and technical the whole time and with so many good cyclists it’s going to be really interesting and challenging. There are several big names like Marten and Gustav and Alessandro that will try and breakaway so I just need to be prepared for everything.”

Vendula Frintova (CZE)
“It was exciting to win at home last month and that was always a focus after my second last year, but here in Weihai the conditions should suit me so much better – the course is similar to Karlovy Vary with the tough hill but I’m looking forward to some warm, sunny racing. The field is really strong here and I’m sure Taylor Spivey will be strong along with athletes like Claire Michel, so it will be a good battle.”