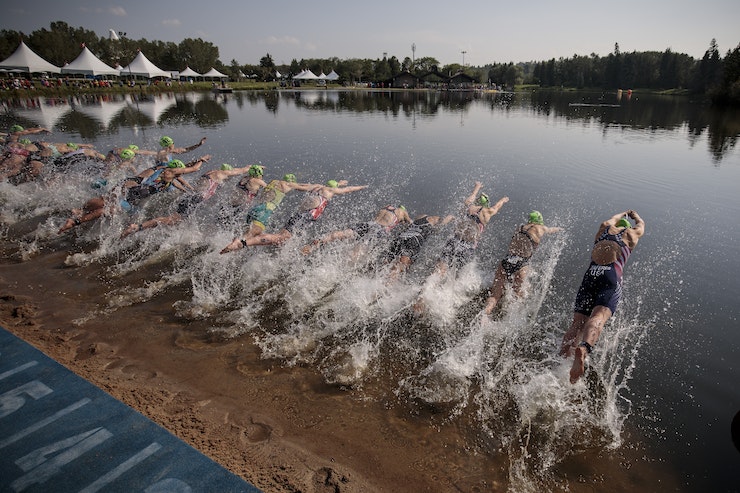 With the current leaders of the World Triathlon Series -Katie Zaferes (USA), Jessica Learmonth (GBR) and Georgia Taylor-Brown (GBR)- not racing this weekend in ITU World Triathlon Edmonton, the field is wide open for a a handful of athletes looking to make a strong statement at the end of the season, before the world leaders head to Tokyo for the Olympic Test Event and to Lausanne for the Grand Final. And USA’s Taylor Spivey looks determined to get in the Canadian city her first WTS victory of the season.

Even with Katie focusing on a block of training and skipping WTS Edmonton, the USA has one of the strongest teams lining up this Saturday for the women’s race, with four of the five top spots on the start list held by Americans: Spivey, Summer Rappaport, Chelsea Burns, Taylor Knibb and Tamara Gorman.

Spivey, who will be wearing number one this week, will be a woman on a mission this Saturday: claiming her first WTS victory of her career and also trying to make it to the Series ranking’s podium, after a consistent season in which she has earned already two medals -silver in WTS Abu Dhabi and bronze in WTS Yokohama, but has never finished lower than in the sixth place. She will have to keep an eye for her training partner and teammate, Rappaport, who has also been twice in the WTS podium this year, silver in WTS Yokohama and bronze in WTS Hamburg, and who has been a regular medalist on the ITU World Cup circuit, including victories in Miyazaki, Japan and Huatulco, Mexico.

With Burns, Knibb and Gorman also as potential medallists in Edmonton, USA is aiming for the second podium sweep of the season, after the one they got in Yokohama, exactly as they did in Edmonton back in 2016.

Wearing number 3 this weekend will be one of the strongest Japanese athletes this season, Yuko Takahashi, who has proven this season that training in an international environment has helped her becoming more competitive and is aiming for her first podium of the season, after missing it in Yokohama. Claire Michel (BEL) and Lisa Perterer (AUT) can also be put in the mix for podium contenders, after some solid performances this season.

Another strong team will be the Australian one, with Ashleigh Gentle returning to the WTS circuit after a small hiatus, and with Emma Jackson in great form after finishing in 7th place in WTS Montreal. Charlotte McShane and Jaz Hedgeland are also joining the WTS Aussie squad, after powerful races in the world cup circuit this season. Kiwis Nicole Van Der Kaay and Sophie Corbidge are always worth keeping an eye on, as will be Spaniards Miriam Casillas Garcia, Carolina Routier and Sara Perez Sala, the three of them excellent swimmers.

In Edmonton we will see what probably is be the biggest age difference in ages, with Maria Czesnik (POL) towing the start line at almost 42 years of age, and with Mexico’s Mercedes Romero Orozco being only 17, 25 years difference.

The race in Edmonton, Alberta, marks the eight stop of the regular-season WTS circuit, with athletes covering a sprint-distance 750-meter swim, 22-kilometer bike and 5-kilometer run.