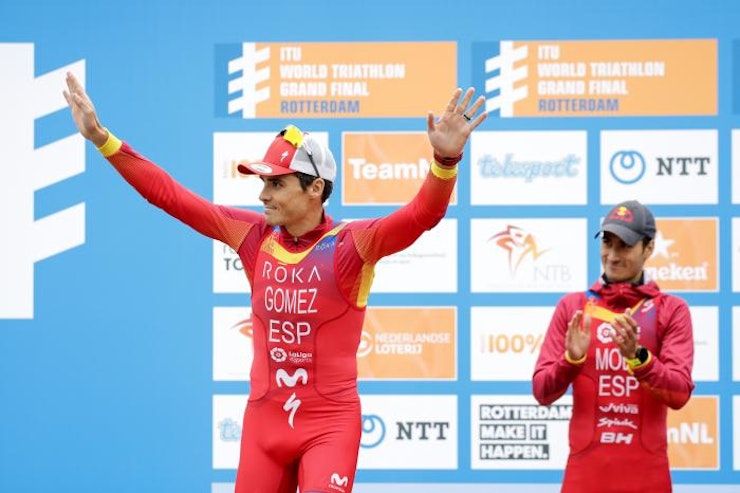 The year is off to a firing start with athletes entering the season in strong form, after solid pre-season training builds. The ITU World Cup tour heads across the Tasman to the coastal city of New Plymouth, on the North Island of New Zealand for the 2019 New Plymouth ITU Triathlon World Cup. This stop marks the third race on the World Cup circuit.

Competition across the men’s and women’s start lists is loaded with experience including Olympians, Commonwealth Games representatives and ITU champions, slated to compete for points and success in the early part of the racing season. The 2019 New Plymouth ITU Triathlon World Cup features a sprint distance race format, covering a 750m ocean swim from Ngamotu Beach, 20km cycle and 5km run along the scenic roads of Taranaki, New Zealand.

Men’s race preview
The men’s race in New Plymouth is headlined by Spanish Olympic silver medallist and five-time ITU World Triathlon champion Javier Gomez, who will commence his return to ITU racing in New Plymouth this weekend. The Spanish superstar returns to ITU and World Triathlon Series racing, with his sights fixed on a place at the Tokyo 2020 Olympic Games.

“I’m excited to do an ITU race again, it’s been a while! New Plymouth is a race that I’ve always liked and have great memories from 2008 and 2014, when I raced there. For me it’s a preparation race for World Triathlon Series in Bermuda and I look forward to some fast racing again,” said Gomez.

Canada’s Tyler Mislawchuk has had an outstanding start to the season, with his first world cup win in the Mooloolaba ITU Triathlon World Cup earlier this month. Mislawchuk will be looking for quick transitions and speed across the sprint distance format in New Plymouth, commencing with an ocean swim.

New Zealand’s Sam Ward, silver medallist in the 2018 New Plymouth ITU Triathlon World Cup, is motivated to perform at his best with a home crowd advantage. “Looking forward to racing at home in front of family and friends. My training has been going really well and I have had a great first WTS round in Abu Dhabi. Last couple of weeks have been a little bumpy with travel and a bit of sickness but I feel I have recovered now and ready to put my best foot forward for this weekend,” Ward said.

Australia’s Brandon Copeland, who had the best race of his career in Mooloolaba which awarded him the silver medal, is thrilled to be lining up to race against Gomez. “To be lining up and racing against Javier Gomez is an incredible opportunity for us. I can’t wait to get out there,” Copeland said.

Bronze medallist in the 2018 New Plymouth ITU Triathlon World Cup Matthew McElroy, from team USA, is among the top seeded men on the starting list. McElroy had a robust race in Mooloolaba and crossed the finish line in fifth place. The USA triathlete will be looking for a top spot on the podium on Sunday.

McElroy’s fellow team member from the USA Eli Hemming will be motivated to put on a show in New Zealand. After having to withdraw from the race in Mooloolaba, due to an unfortunate tumble on the bike, Hemming will be battling for redemption in New Plymouth. Hemming produced a classy performance in Abu Dhabi, claiming a silver medal in the mixed team relay for team USA.

Slovakia’s Richard Varga, renowned for his prevailing swim stroke, will be set to attack the race from the start.

Women’s race preview
The women’s start list features a hustle of sprint specialists and world cup champions, positioned to line up on Ngamotu beach to attack the race.

The top seeded female heading into New Plymouth is Australia’s Emma Jeffcoat. Jeffcoat produced the season of her career in 2018, with world cup success and stepping up to compete at the World Triathlon Series level. The Australian triathlete has commenced her 2019 campaign with a gold medal performance in the Triathlon Mixed Relay Series Abu Dhabi and an encouraging twelfth position in the Mooloolaba ITU Triathlon World Cup, in a competitive field of elite women.

Fellow Australian team member Charlotte McShane was forced to withdraw from competition in the Mooloolaba ITU Triathlon World Cup due to illness and is motivated to commence her season with success in New Plymouth.

America’s Renee Tomlin will be one to watch on Sunday. Tomlin produced an outstanding race result in Mooloolaba recently and was awarded the silver medal. Tomlin will be looking to follow in the tradition of fellow American triathletes including Gwen Jorgensen, Katie Zaferes and Kirsten Kasper, all down in the history books of New Plymouth with gold medal glory. The young gun American triathlete wants to ensure that USA remains on the top spot of the women’s podium. “I’m certainly motivated to aim for another podium performance for Team USA. If I’m not mistaken, the U.S. women have been on a winning streak in New Plymouth since 2014! That alone makes this race a special one for all of us U.S. women lining up on Sunday. Looking forward to the remainder of the season, I’m fired up to continue to line up and simply compete, mix things up and showcase my ability to contribute to the US team. I’m very grateful for the opportunities to race in the stars and stripes,” said Tomlin.

New Zealander Nicole Van Der Kay is ranked as a top contender and favourite leading into the race. Van Der Key made it onto a world cup podium for the first time here in New Plymouth in 2019 and will be looking to make another striking impact in front of a home crowd. “The New Plymouth World Cup is pretty special to me. It’s were I cracked my first world cup podium and it’s on home soil! The atmosphere has an incredible vibe and the organisers provide a unique cultural experiences like no other world cup, that make you feel welcomed and a part of something pretty special,” Van Der Kay said.

After a solid start to the season claiming the bronze medal in the 2019 Discovery Triathlon World Cup Cape Town, seventh place in Mooloolaba and an intense training camp in Queensland, Australia, in between races, USA’s Tamara Gorman will be motivated to make it on the podium here in New Zealand.

Italy’s Angelica Olmo will be looking to attack the race and continue her success, after making her way onto the podium with the bronze medal in Mooloolaba for the second consecutive year,
Switzerland’s Jolanda Annen, Japan’s Juri Ide, Estonia’s Kaidi Kivioja, Hungary’s Zsofia Kovacs and Spain’s Miram Casillas García are among the top-seeded women, marked as top contenders on the start line in New Plymouth.

With such strong competition across both fields in New Plymouth, the battle for podium contention could boil down to a sprint finish, in both races.