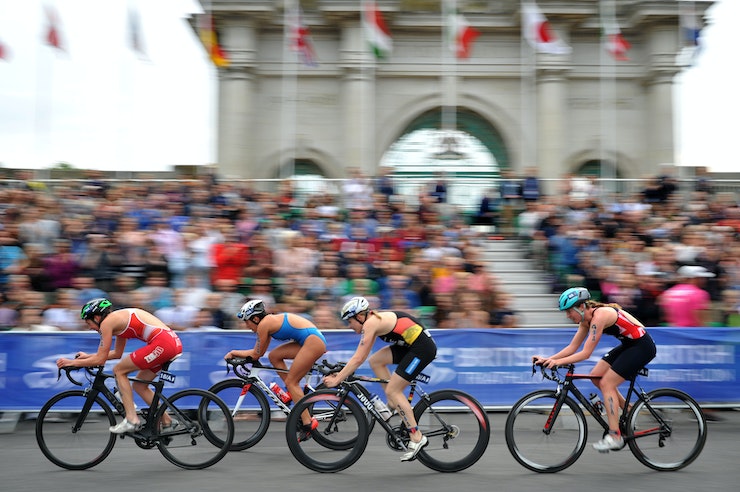 With its unpredictable drama and fast and furious format, the world’s leading teams are heading to the banks of the Trent River in Nottingham for the Accenture World Triathlon Mixed Relay event this Saturday. Due to persistent rainfall over the past week in the Nottingham area, the event will now be held as a duathlon. This decision has been made as a result of an additional water quality tests taken this week.

The Elite Mixed Team Relay Race will still start as planned at 4.06pm with 14 Teams toeing the start line for a first leg 1.5km run, then into a 7km cycle and ending with another 1.5km run. The start list features 14 teams, all of them vying for ranking points on offer towards Olympic qualification, with Mixed Relay set to make its debut in Tokyo 2020. Due to the fact that the race will now be held as a duathlon, teams will receive only 75% of the points, according to the ITU rules.

Nottingham hosts the second stop of the Mixed Relay series following a thrilling start to the season in Abu Dhabi in March, and will be followed by ITU Mixed Relay World Championships in Hamburg, Germany, on 7 July, with the Series finale to be held in Edmonton, Canada.

The teams have until up to two hours before the race start to announce their final squad line ups, which leads to the first strategic battle of the day with some countries announcing their athletes well in advance, while others prefer to wait until the last minute.

One of the strongest teams on the start line will indeed be the hosts Great Britain, with a preliminary squad featuring one of the stronger runners in the ITU field, Alex Yee, along with the most recent WTS winner in Leeds only a few days ago, Georgia Taylor-Brown. Both will have need a quick recovery after racing only five days ago, as will teammate Sophie Coldwell, but they will have also the fresh legs of Ben Dijkstra to call upon.

Also vying for podium spots will be current World Champions, Team France. The team will have really strong runners such as Dorian Coninx -winner in the 2019 WTS Bermuda- Pierre LeCorre, Sandra Dodet and Emilie Morier, with all of them having shown this year their strength in multiple races, so they will definitely try to repeat victory in Victoria’s Embarkment this Saturday.

They will have to keep an eye on the winners in Nottingham last year, Team USA, who is bringing a young but also fast team led by Tamara Gorman, and including young strong runners like Renee Tomlin, Tony Smoragiewicz and William Hauffman.

Another team that can be expected to be among the ones fighting for the podium will be Australia, who has decided to have their athletes recovering and doing some heat training before arriving in Leeds. The Aussies will have Emma Jeffcoat, Ryan Fisher, Natalie Van Coevorden and Matthew Roberts originally planned, with Sophie Linn and Lorcan Redmond as reserves.

Also vying for the top positions will be Team New Zealand, bringing the top guns into competition in search of another podium spot in the Mixed Relays, which have proven to be very successful for the Kiwis in the past years. Lining up for the All Blacks will be Hayden Wilde, Taylor Reid, Nicole Van Der Kay and Ainsley Thorpe.

One of the teams that has decided to bring their A team to Nottingham is The Netherlands, with Rachel Klamer, Maya Kingma, Joric Van Egdom and Marco Van Der Stel all in the team, but they are also one of the very few teams with the four members having competed in the tough course of Leeds a few days ago.

On the other hand, some teams as Spain or Belgium have also spots reserved for the next generation of athletes, with young and new faces lining up in Leeds, while other countries like Canada, Germany, Japan, Switzerland or Italy have a mixture of athletes usually racing in the WTS circuit -Jonas Schomburg for Germany, Alice Betto for Italy, Jolanda Anen for Switzerland, Juri Ide for Japan or Joanna Brown for Canada- with upcoming athletes that are making their debut in the top level circuit.

Join the action and tune in to triathlonlive.tv to watch live the Accenture World Triathlon Mixed Relay Nottingham event this Saturday, and enjoy the exclusive pre show live from Nottingham with interviews with all the teams and behind the scenes content, from 15h local time.