The elite men’s race will enjoy a power loaded startlist this weekend with eight of the top ten Columbia Threadneedle ranked men lining up, in addition to Alistair Brownlee. The weekend of racing marks only the second time that a WTS has been hosted on the continent of Africa. With the women kicking off the weekend’s competitions on Saturday, the men will take to the the start line the following day on Sunday, April 26. While the younger Brownlee brother has been busy dominating the WTS circuit, with back-to-back wins in Auckland and Gold Coast, Cape Town will be the host site of the 2015 debut of the other Brownlee. Older brother, Alistair Brownlee (GBR) kicks off his season by competing in his first WTS since his victory at the 2014 ITU World Triathlon Grand Final in Edmonton. Brownlee has spent the first part of the year recovering from an injury, but will without a doubt come fresh and well prepared to perform at full capacity this weekend. A healthy Alistair almost insures an unstoppable execution on the course.

With the return of Brownlee, Cape Town is set to also provide the return of the healthy rivalry between Brownlee and Javier Gomez Noya (ESP). Gomez, who also has had season setbacks due to injury, has used the early 2015 season to improve on his racing. But with numbers making the comparison, Brownlee stacks up just a little bit higher than the reigning World Champion. Brownlee currently holds the record for the most WTS race wins at 17, while Gomez sits at 10 victories, a two-way tie between him and Jonathan Brownlee.

Gomez might also benefit from having three other teammates out sharing the course. Spain is set to present a strong roster in Cape Town, as they hold four out of the top 10 spots on the start list. Mario Mola enters the race with a gold medal from Abu Dhabi and a silver from Gold Coast and could likely make the podium again if he performs in the same consistency. Fernando Alarza and Vicente Hernandez also join the ranks of the Spanish representation. Alarza and Hernandez have both come just short of the podium, each tallying a fourth-place finish in previous WTS races earlier this year.

South Africa’s own Richard Murray, Henri Schoeman and Wian Sullwald will all get a chance to race on home soil this weekend. Murray has been having a strong season so far this year highlighting a bronze medal from Abu Dhabi and earning a gold in the New Plymouth World Cup. Look for Schoeman to exit the water out front and be a factor on the pace set on the bike, as could Dmitry Polyanskiy (RUS), who took third here last year.

The men will get underway at 14:55 local time on Sunday, April 26. Click here to convert the start time to your time zone. Watch the races live on triathlonlive.tv and follow on @triathlonlive for play by play updates. 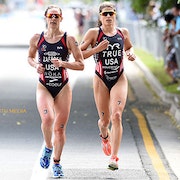 Cape Town marks the fourth stop and the third continent in ITU World Triathlon Series. Having just been added to the WTS line up last...