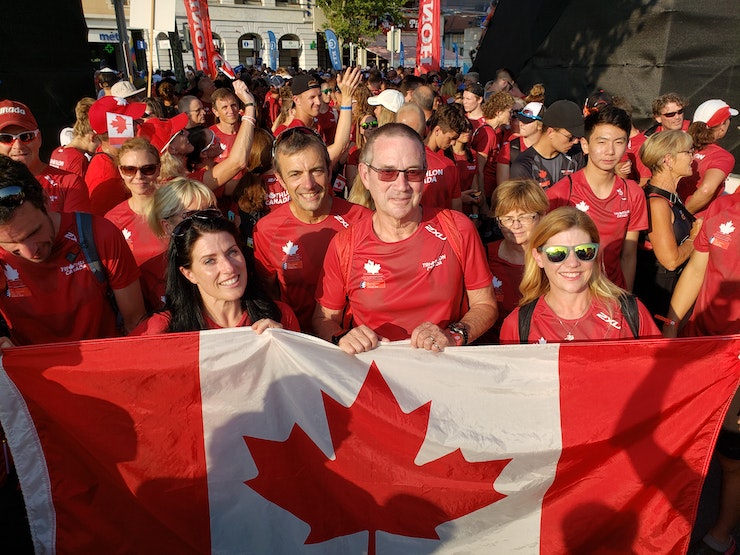 Season reflects: Paul Allingham on the 2019 ITU World Championships in Lausanne and what triathlon means to him and his family.

“My family and I get a great sense of accomplishment and togetherness from triathlon and it has become a very large part of our lives beyond working and careers and my retirement. I don’t think my life would be a full as it is now without triathlon.  Other than continuing to participate with my kids my next goal is to hang around for another few years so I can race with some of my grandkids.  ”

Paul Allingham, 75, is a top age-group triathlete from Canada who has stepped onto the start line of 10 World Triathlon Championship events (standard, spring and aquathlon) including ITU Grand Finals in London, Edmonton, Chicago, Rotterdam and more recently in Lausanne in 2019.

Paul, Terri and Lara were awarded with the honour of being flagbearers for Triathlon Canada at the Parade of Nations in Lausanne.

My family and I get a great sense of accomplishment and togetherness from triathlon and it has become a very large part of our lives beyond working and careers and my retirement. It is also a huge source of pride for my wife Joanne and I to see our 3 children and 4 of our 6 grandchildren participate in the sport. They seem think I inspire them but the truth is that they inspire me more than they know.

I was always involved in athletics growing up including competitive swimming and university basketball among many other sports. As I approached retirement I joined the Canada Get Fit running club locally with the goal of running a marathon.  I persuaded my wife and children to participate with me (all have done marathons) and this sort of paved the way for our “family thing” of racing together.  I subsequently did several marathons including New York, Chicago, London and Berlin. When I retired at age 62 in 2006 I found I needed something more to fill my time and it needed to be physical so I began doing training for triathlons at the suggestion of some of my running club friends.  In 2007 I did my first Sprint, Olympic and 70.3 Half Ironman races and I was hooked. My goal then was to do a full Ironman which I did in 2008 and every year thereafter until 2012. My goals were simply to participate and finish.

But then I did the newly launched Sprint race in Toronto near our home in Burlington and was surprised to qualify for the Canadian Team going to the London ITU World Championships in my age group on the Olympic course in 2013. So I changed my focus to compete in shorter races up to the Half Ironman 70.3 distances.  Now my goals were to be on the Canadian Teams going to World Championships.  I began winning more in my age group and competed in the World ITU’s in London (2013), Edmonton (2014), Chicago (2015), Rotterdam (2017) and Lausanne (2019), plus the World 70.3 Championships in Mont Tremblant, Quebec (2014) and Mooloolaba Australia (2016).  They have always been well organized events which my wife and I thoroughly enjoyed.  It was wonderful to meet competitors from all over the world and we have established some great friendships especially with a German couple who we met first in Edmonton, again in Rotterdam and who we will see again next year in Edmonton 2020.  Tara, Kerri and I have all qualified for the Canadian Team there next year.

I typically do 6-7 races a year leading up to the Worlds.  Along the way my children started getting into the sport. My oldest daughter Tara Smith qualified for the Canadian Team and went with us to Rotterdam with her family. Then both she and I and my younger daughter Kerri Allingham qualified for the Canadian Team going to Lausanne.  During all of this 4 of our 6 grandchildren began doing triathlons through Kids of Steel and the TriKids races. We did their race simulations in the backyard pool and on the front sidewalk – very gratifying. And my son joined us for the last 3 years to do the Sprint race where he lives with his family in Mont Tremblant. So for us it truly is a family “thing”. This is the most gratifying part for me. And Tara, Kerri and I were surprised and humbled to be asked to be the flagbearers for the Canadian Team in Lausanne at the Opening Ceremonies parade.

Over the years my wife and I have travelled to a lot of neat destinations to do races and we most often add on a holiday after the events. Joanne has been a terrific and patient supporter and enjoys the holidays as kind of a reward. After Lausanne we went to Italy where her mother and father are from, and visited with her family there.

I have been a member of the Triathlon Club of Burlington since I started triathlon. This gives me a solid base for disciplined training and helpful coaching and advice. Also along with my running club it provides a wonderful social network with many like-minded friends and contacts. This is one of the things that I value most in the sport.

The success of Triathlon in Canada undoubtedly started after Simon Whitfield won the gold medal at the Sydney Olympics in 2000.  It grew dramatically and flourished after that. Many triathlon clubs formed and other “ambassadors” of the sport like Barrie Shepley (Simon’s coach in 2000) started holding clinics and Training Camps.  I have attended several and find them very helpful to refine my techniques and training and get rid of bad habits that creep in over time. Triathlon Canada has also been very involved in growing the age group sector of the sport as well as the Elite level and I have valued their support. Age-group team manager Christine Cogger was particularly helpful in Lausanne when Tara had a bike problem two days before the race.

I don’t think my life would be a full as it is now without triathlon.  Other than continuing to participate with my kids my next goal is to hang around for another few years so I can race with some of my grandkids.

Replay the races and follow the athletes on TriathlonLIVE.tv 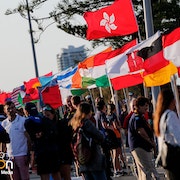