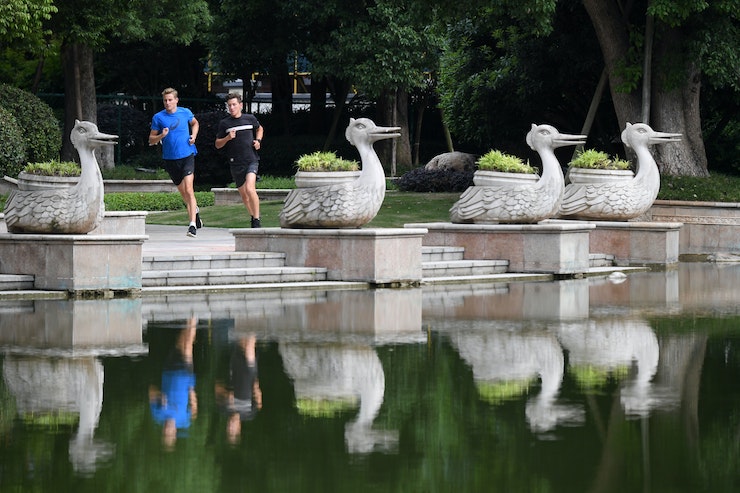 Chengdu, China, is the next stop on the World Cup circuit and will see athletes contest across the multi-race format in the Chengdu ITU Triathlon World Cup this weekend.

This is the only event of the series that hosts a sprint distance on the opening day of competition and a super-sprint race on the subsequent day, in a unique racing set-up. The semi-final elimination round will have athletes complete a sprint-distance course, over a 750-metre swim, 20-kilometre bike and 5-kilometre run.

The men’s field will have a total of three semi-final rounds where the top nine men from each round will qualify for the finals, followed by the next top three fastest combined times to create a total of 30 men for the “A” Final start list.

For the women, two heats will occur with the top 14 finishers from both rounds combined with the next two fastest times will create the 30-woman “A” Final roster. In both genders the athletes with the time of 31st to 60th position in the semi-finals will qualify for the “B” Finals.

The finals will then cover a super sprint-distance format, which will see the athletes battle it out over a 400-metre swim, 10-kilometre bike and 2.5-kilometre run, to crown the overall champions.
Fields are stacked with experience and racing will be competitive and fast, it’s sure to be a thrilling weekend of racing action.

Elite men’s preview
The men’s field will consist of three rounds of competitions, all containing world cup specialists, eager to set early intentions and make it through to the A final.

The first heat will be challenged by Bence Bicsak (HUN), after having the best race of his career in the recent World Triathlon Series race in Bermuda, where he crossed the line in seventh position, the Hungarian will be one to watch across the sprint distance format. Matthew Sharpe from Canada, claimed a top ten finish in the recent Mooloolaba ITU Triathlon World Cup, and Irving Perez from Mexico, will be among the field of men looking to strike and make an early impression on the weekend of racing.

The remaining heats are stacked with experience with the likes of Mexico’s Olympian Rodrigo Gonzalez on the line. The Mexican won in Chengdu in 2016, across an Olympic distance format, and claimed the bronze medal in 2018, Gonzalez will be vying for the top spot on the podium this weekend.

Gonzalez (MEX), who claimed fifth place in Bermuda in 2018, will go head to head with Japan’s Jumpei Furuya and Germany’s Valentin Wernz. Wernz had a stellar race in Mooloolaba in March where he earned the bronze medal.

Close behind is Australia’s Matthew Hauser who, after returning from injury, will be sighting a spot in the final and wanting to make an impact on the field.

“I’m super pumped to be back here in Chengdu after the success I had in 2017. I love the shorter format of the heats and final, allowing the athletes to measure themselves before ripping into the final. This race is all about who can conserve, recover and prepare for the final run into the blue carpet the best and is similar stimulus to backing up for a Mixed Triathlon Relay, post an individual triathlon. It’s my first race since Yokohama WTS last year so I’m itching to get back out there,” said Hauser.

Elite women’s preview
To commence the sprint distance elimination rounds in the first heat of the stacked women’s event is Germany’s Laura Lindeman and Zsofia Kovasc from Hungary, who will be looking to attack from the start.

Other strong prospects in the first heat who will put the pressure on to be up front are (AUS) Danielle DeFrancesco (AUS) and China’s own triathlete Mengying Zhong.

Sophie Corbridge from New Zealand will be on the hunt for an early lead in the semi-finals, as she lines up to contest against a string of sprint specialists in the multi race format in Chengdu.

Renee Tomlin, from USA, will be looking for a dynamic swim, bike and run combination in the second heat after knowing what it takes to tackle the 2-day multi-race format. Tomlin has had a disappointing start to the season with illness so will be loking to fight across race weekend.

“I’m a huge fan of the prelim-final format and stoked to give it a shot at the super sprint distance, pending final qualification this weekend. I think this format showcases athletes with tactical awareness and speed. It should be exciting all around,” said Tomlin.

Both heats are stacked with experience and sprint specialists toeing the start line.

On Saturday, May 11, the men will get underway in the 2019 Chengdu ITU Triathlon World Cup with the first semi-final round taking place at 09:00am (local time) while the women will follow at 11:30 local time. The “A” finals round will take place on Sunday, May 12, with the men starting at 10:05am (local time) and the women following directly after at 10:50am (local time).

TriathlonLIVE will be streaming all races across the weekend. Follow the athletes and races on triathlonLIVE.tv .